IT MAY BE TIME FOR PEACE…. FOR A RESOLUTION FOR THE FUTURE.

I keep seeing the postings on social media about Trump haters or Hillary belongs in jail.  Photos such as this being posted to continue to drive the divide in our nation and people. 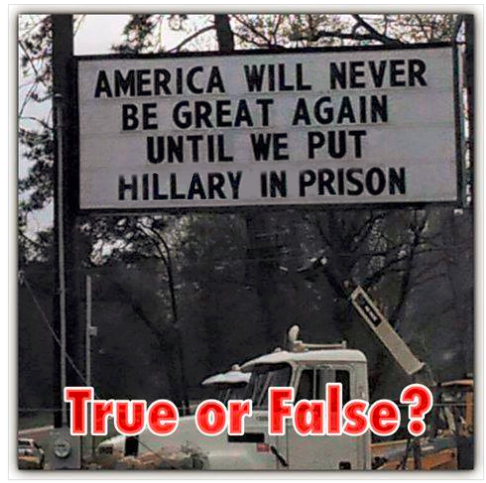 America WILL be great again because the silent “and at times sleeping” majority have spoken. Clinton and Obama attacked America with a self serving agenda for the past eight years, just as many from the other side of the political aisle have done for decades. The 2016 election was an event that I liken to that which our parents lived through with Pearl Harbor … the then Japanese nation attacked and awoke a sleeping giant.  As the following “unverified” statement so appropriately coined… “I fear all we have done is to awaken a sleeping giant and fill him with a terrible resolve.”

I truly believe we owe Clinton a moment of thanks.  Why?  Because after our silent majority allowed, for decades, those in public office to destroy our retirement accounts, escalate our national debt and reduce our constitution to nothing more than the paper it was written on, it was the arrogance of Bill and Hillary Clinton, along with the blatant about-face of President Obama, as to Hillary’s qualifications for the Presidency, awoke the sleeping giant of the America people again.

Many of our neighbors, some of our friends and even a few of our family would debate the fairness of the election outcome over the fact the election ended with Clinton receiving the popular vote “64.2 million vs. 62.2 million for Trump” yet Trump became our President Elect based upon the electoral vote.  The reality that I believe they are missing is this.  A large portion of our population vote with the media directing their opinion as well as based upon the influence of the negative campaign ads overwhelming our airways day and night.   Clinton outspent Trump almost 2 to 1.  She raised and spent almost $1.2 billion dollars vs Trump at $616 million.  To me, as a consumer advocate with a heart for our homeless, vets and elderly living on the streets or in conditions where they do not know how they will pay for their food or shelter tomorrow… $1.8 billion dollars spent on a Presidential race makes me want to vomit.

If Clinton and Trump had been matched dollar for dollar on their political Ad spend as well as if the major media outlets had not focused their sights on taking down Trump, I believe we would have seen a much greater popular vote for Trump.   Trump did play the crooked Hillary and sex starved Bill cards quite well which more than likely got him more votes.  However, the truth is this.  America, we the American people, needed a wake-up call and a call for action and change and we got it.   So, does Hillary need to be accountable for her alleged illegal actions which may have jeopardized the lives of Americans overseas and here at home,  YES!  If she is not called to account for these possible crimes will this derail America from becoming great again?  NO!  America will become great again because the vast majority of Americans are GREAT, WONDERFUL, COMPASSIONATE, GIVING PEOPLE, made up from every race, color and creed there is.  That is what makes us who we are.  We simply fell asleep in the car as we were being driven off course for a while by those we entrusted with our safety and our constitution.

I for one will not fall asleep again.   Will you?

Thank you for being a healthy part of the solution and a positive future for us all.  And may God bless America.

Together we CAN make a difference! With our LostMoney
The Challenges We Face